I’m not quite sure what I thought extracting vanilla would entail, but in my head it definitely sounded much more complicated than it actually is! Making homemade vanilla extract is super easy and I really wish that I would’ve started this sooner!

I took some advice on making it from this post on homemade vanilla extract, this video on making vanilla extract, and our local organic farmer friend who suggested using Brandy instead of Vodka.  I admit, I did feel a *little* strange going into the liquor store and asking “Do you know what the best Vodka would be to make vanilla extract?”  I’m sure they laughed at me as I was walking out the door.I’m not quite sure what I thought extracting vanilla would entail, but in my head it definitely sounded much more complicated than it actually is! Making homemade vanilla extract is super easy and I really wish that I would’ve started this sooner!

I decided to try making Vanilla Extract with both Vodka and Brandy to see which one I like better (here’s the update!)  I got mixed opinions from the articles that I read online, so I’ll just see for myself.  🙂

Are you ready?  This is so easy! 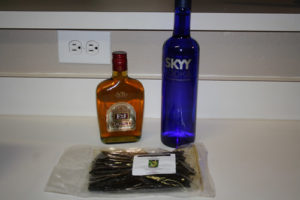 Take the vanilla beans out of the package and cut them lengthwise.  I cut down the center and left it together at the ends so that it would be easier to put into the bottles.  I used 14 beans for the Vodka (750 mL) and 8 beans for the Brandy (375 mL). Pour as much of the liquor that’s in the measuring cup as you are able to back into the bottle and then close it. Let sit in a cabinet for about 2 months or until it smells like vanilla extract and the liquor has turned dark.

I’m super excited about this because now I know what I’ll be making for Christmas presents this next year!

You can find a GREAT deal on labels for your vanilla extract bottles here!

Here’s the cost breakdown for this project:

NOTE: If you buy less expensive Vodka then you can get your price per ounce much lower.

This is a much better deal for me, and, well, it’s just fun to make it myself!! 🙂

I mentioned on Facebook a couple of weeks ago that I was trying out a new chicken nuggets recipe and...