This was orignally published in 2012 and are re-posting for those who have not seen it yet or for anyone who would like to share it.

Those of you who are following us on Facebook know that a couple of weekends ago we had a LEGO Birthday party for our 7 year old boy! We typically don’t do the themed parties… in the past, birthday parties have just been an excuse to have a bunch of families we know over and hang out together! But he REALLY wanted a LEGO party this year with just a handful of his friends.

And you know, I really think they would’ve been happy with just cupcakes and Lego Star Wars on the Wii. I had to DRAG the boys away from Lego Star Wars to play the games that I had planned for them, lol!! So, if you do have a LEGO party, and you have a Wii… that game of LEGO Star Wars just might be worth buying because it will entertain them for at least half of the party time! 🙂

So here’s what we did from start to finish, along with the price breakdown for each item: 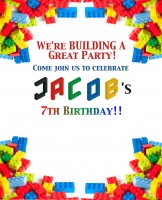 Also, Keri from One Mama’s Daily Drama used the template above to create a LEGO figure coloring page.  You can download that here!

(If you’re looking to purchase invitations to mail out in the mail, check out these super cute LEGO Birthday Party Invitations that you can buy!  Plus Expressions Paperie offers some great coupon codes from time to time so be sure to sign up for their email list too if you plan on buying something in the near future!)

Pizza from Target for 8 little boys? It was only $4! I did splurge on the Honest Kids Organic Juice at around $3.50 for the package.

We didn’t need cups because we had the juice pouches so we only had to get the plates which were $1.99 at Party City for the 8-pack.

We bought 12 balloons (only 11 made it to the party though) and tied them to yellow cones that we had in the garage. I also got the big HAPPY BIRTHDAY LEGO Star Wars sign to hang up in the room.

Oh, and a big bowl of LEGOs in the middle of the table for them to build with (FREE!)  🙂 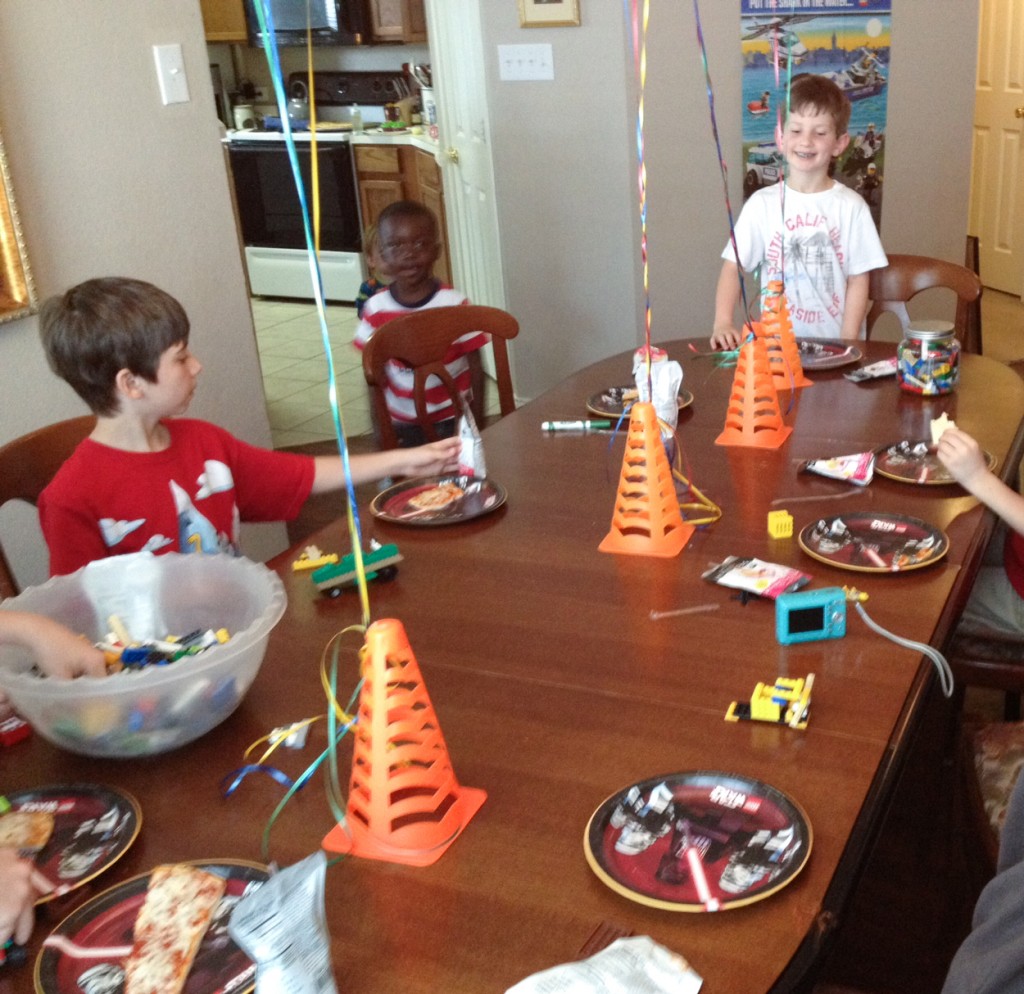 (Yes, we mixed regular LEGOS and LEGO Star Wars stuff and none of the boys seemed to mind!) OH MY GOODNESS the cupcakes were amazing!!! And yes, those are fondant LEGOS, and yes, they are AWESOME (it’s marshmallow fondant, not typical nasty fondant and it is DIVINE!)

The cupcakes were made from this White Cake Recipe, this Buttercream Frosting Recipe (except with all butter since I’m not a shortening fan), and this Marshmallow Fondant Recipe!

One more picture?  Yes, those are charger plates from our Christmas collection and one of them is on top of an upside down bowl!  Do you think the boys noticed?  NOPE! Price: around $13.00 for everything you need for the cake! (A friend of mine had the candy mold, but if you don’t have it then it’s $12.99 for the lego ice cube tray/candy mold that you need to make the fondant legos.)

Well, like I said earlier, the boys would’ve been more than happy to play LEGO Star Wars the entire time, but I had planned games for them so I forced them away from the Wii! This was a super easy one and they loved it! I got one of my small jar containers from the pantry, emptied it into a ziploc (it was storing baking powder) and filled it up with LEGOs. Then I had the boys guess how many were in there! No one got close (there were 237 and the highest they guessed was 110), but they still had fun! This was an impulse buy at Party City, but I’m glad we got it. The boys had fun playing it and I just didn’t have the time to cut out a full lego figure from construction paper to play pin the head on the LEGO guy. (Price of this one was $4.99). The boys had a blast with this one! I divided them up into two teams (they had to pick either a red lego or a blue lego from a bag to determine which team they were on) and lined them up. There were two bowls at each end of the yard… an empty bowl by the team, and a bowl full of legos in their color on the other side. They had to run across the yard and put one lego at a time on a spoon and run back and put it in their bowl and then pass the spoon on to the next player. Once the last person was finished then the first person ran again. They did this until one of the teams got all of the LEGOs in their bowl! They probably could’ve played this a couple more times, but we were running short on time since they had played LEGO Star Wars for so long earlier! I wasn’t quite sure how this one would work out. I had seen it on Pinterest and thought it was a great idea so I decided to try it and the boys loved it!! You get a bunch of random LEGO pieces and put them into a bag. Pass the bag around the group and each kid takes out one of the LEGOs and puts it on the flat LEGO board. It’s kind of like the game where you start a story and each person has to build onto the story as you go along… except with LEGOs! The boys were very proud of their creation (and all of them enjoyed it… from the 4 year old up through the 10 year old!)

I wanted each boy to be able to take home his own LEGO figure from the party, and I was worried this was going to be one of the most expensive items of all. Each LEGO person at the LEGO store is $3.33, so times 9 boys (because even though there were only 8 boys, you have to buy them in groups of 3 at the LEGO store) is $29.97 plus tax. So instead I got two of the LEGO City Police Minifigure Collections at Target for $8.99 each. Each of the boxes came with 4 guys, so it was perfect! And the boys really enjoyed putting them together too (I’m sure the pieces didn’t end up going with the right characters, but everyone was happy with what they made!) I also got them LEGO Star Wars pencils, pencil sharpeners, and notepads – around $9 total.

Total for party favors: $29.97 (for EVERYTHING… which was as much as the 9 LEGO men would’ve started to begin with!) 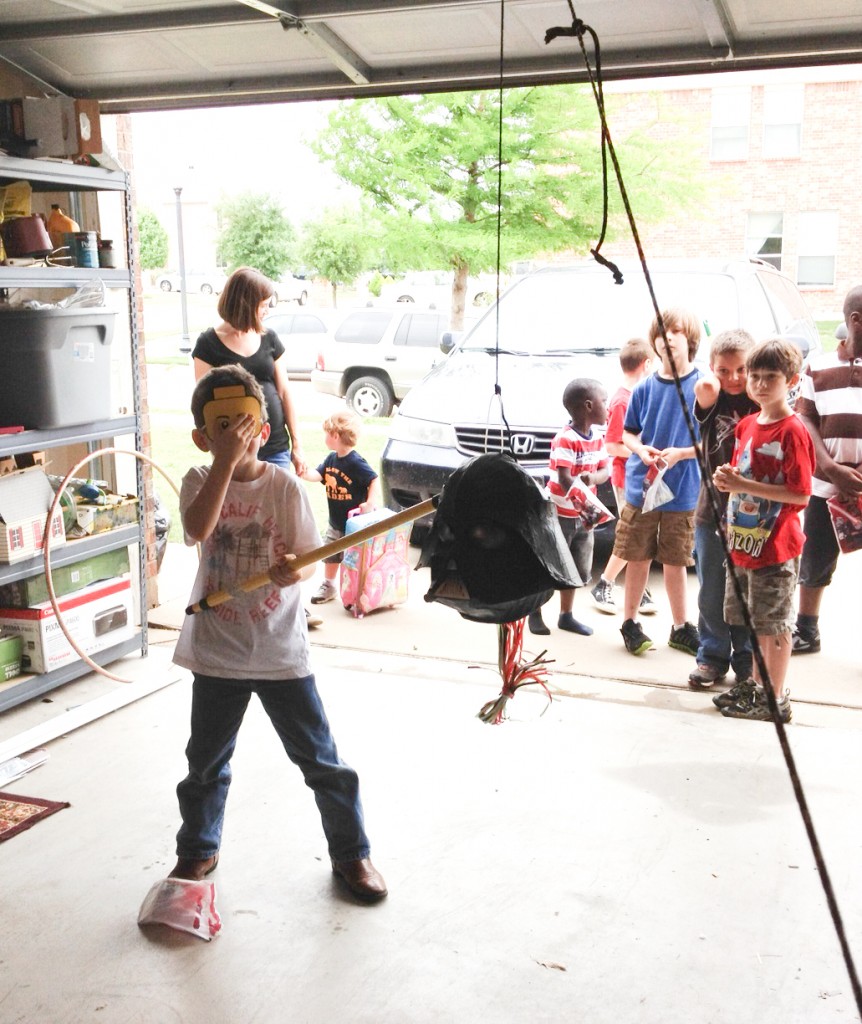 The Piñata was another impulse buy but it was such a hit with the boys! The only problem was that it didn’t hold together very well and ended up busting after only a few kids had had their swing at it (anyone know how to reinforce a Piñata?). That was okay though because the candy falling from it more than made up for the breakage! And there really is no reason to stuff a Piñata FULL of candy if you’re not having a big party. We only got about $6 worth of candy and it was plenty for all 8 boys.

{UPDATE: Thanks to everyone who let me know what those strings are for! 😉 }

If I had it to do over again I wouldn’t have bought the extra party favors which would’ve shaved $9 off the cost, and I would’ve prepared a little more beforehand and made our own Happy Birthday sign to shave off another $5.99.

Definitely under my ideal party price of $100, and if I wouldn’t have gotten the extra party favors and happy birthday sign it would’ve only been $81.45!

We’ve had parties at the park with just hot dogs, chips, drinks, and cake that cost more than this (because you have to feed EVERYONE, not just the kids) so I was very very happy with the final price of everything!

I would love to hear your LEGO party ideas too!!  Where do you shave off extra costs on birthday parties?

5 Easy Ways to Save on Healthcare Costs

With healthcare costs continually on the rise there are few who aren't asking themselves how they can keep more of...